“The Internet Society’s vision is to ensure all are connected regardless where they live on the planet. Yet nearly half the people in the world remain unconnected. Those who are connected face new and growing challenges to fully realizing the Internet’s potential. Even as more people come online, it is critically important that the Internet be a platform that enables people to connect, communicate, and innovate.”[Internet Society Journal]

Guifi.Afria was born after reading about Ramon Roca and his team who built a telecommunication project in Vic[Spain] to enable individuals, farmers, institutions to have access to internet where there was no connection and project till today is impacting lives. Reading about such project got me of the fence to know that people in rural areas in Ghana . With help of Meritxell Vilaró admistrator at Guifi.Net she connected me to Ramon Roca and I was invited to Vic in Spain for training and discussion for similar project in Ghana/Africa
From 26 to 30 March I travelled to Spain to meet my role model Ramon Roca ,having hosted me and discussing issues about rural connectivity and denial of digital empowerment I decided to form an NGO with Guifi Net[spain]being our parent organisation with support. Ramon Roca explained the bottom-up, citizenship-driven technological, social and economic NGO with the objective of creating a free, open neutral telecommunications network in rural areas of Ghana. 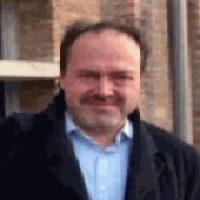 Ramon Roca i Tió is co-founder and the President of Fundació Privada per a la Xarxa Oberta, Lliure i Neutral guifi.net (The Foundation for the Open, Free and Neutral Network -guifi.net). He has always been involved in IT social projects.

In 2003 he had set up the first link of what few months later became the guifi.net community network. That wireless link was his proposal to overcome the lack of ISPs Internet supply in his village located in the rural area in the countryside of Catalonia.

Immediately after, he started promoting his solution among his neighbours and started enhancing the Free Networks’ model. Nowadays he is repeating that process with optical fibre, deploying it according to what he has called the FFTF model, i.e. Fibre From The Farm, a wordplay to stress that the Fibre deployment is made by active common people, From The Farm, instead of by the telcos, To The Home.

This model, called as “Bottom-up Broadband initiative” by himself, was one out of eight selected ideas of the The Digital Agenda Stakeholder Day on 25 October 2010. His professional career has always been related to international IT companies.

Making Internet Accessible To All

We are a team of passionate people who work to build sustainable and proximity alternatives, with innovative technological solutions that favor access to the Internet without discrimination

See how it works

Guifi Africa is working to build a sustainable and proximity alternatives, with innovative technological solutions that favor access to the Internet without discrimination.

Visitors to our websites

Interested in making your services and facilities available to make the Internet accessible to all?